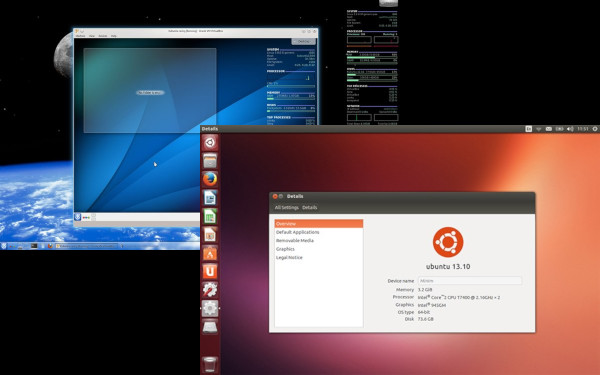 What could be better than looking at one beautiful Linux desktop? How about looking at 2 desktops or 3 or 4 desktops.. all running different apps and different desktop environments? All managed from one computer.

We are talking here about independent desktops running independent apps running from the same computer and all running simultaneously.

Think about that: we can log into a Gnome environment, a KDE environment, a Unity environment and any of the other Linux desktop environments without logging out of a single one. They can all run together on the same computer. Simultaneously.

What is a virtual display?

Virtual displays let us use one computer with one attached monitor to show multiple desktop sessions running independent desktop instances on that same computer.

We have access to 6 command-line shells from which 6 desktop sessions and 6 displays can be spawned. Displays are numbered 0 to 5 and correspond to function keys F7 through F12. This is the typical set-up for a Linux OS.

Test those key combinations. Press Ctrl+Alt+F1 then press Ctrl+Alt+F7 to switch between the shell environment and the GUI display environment. If F7 does not bring your desktop back, try Ctrl+Alt in combination with any of F8, F9, F10, F11 or F12. F7 will usually work fine.

More details about getting into the Linux shell here.

In other words, one physical computer, keyboard, mouse and display can be used to run multiple desktop sessions by one or more users. Each desktop initialized on a virtual display is accessed by pressing Ctrl+Alt+ a function key from F7 to F12. The function key that is typically used to make a display visible is the key that is associated with the shell a user is logged into.

How to initialise a virtual display

The easiest way to start a desktop environment from a shell is to type startx while logged into a command-line shell. Doing this will spawn a desktop session on display 0 which can be viewed by pressing Ctrl+Alt+F7.

See table 1, above, to view the typical terminal and display key combination mappings.

How to specify which display to spawn

Command-line shells are not fixed to opening a specific display and desktop session. We can specify which virtual desktop to open a display on.

Drop to a shell by pressing Ctrl+Alt+F3 then tell X to start another desktop session by typing,

The part after the two dashes is an instruction to xserver. The colon and the number, :2, tell xserver which display number to open. startx – – :2 opens a desktop session on display 2. Display 2 is usually mapped to F9 so this new display can be accessed by pressing Ctrl+Alt+F9.

Type man startx and man xserver at a command-line prompt to learn more about the options we can use to configure a new session when initializing one.

How to set the display manager used for a session

The exact location of display manager binary files can be found with the locate command. New display managers can be installed with aptitude,  apt or yum, depending on your distro.

To stop KDE, we can use

To start KDE, we can use

When we start a display this way we launch the display that is mapped to the terminal we are in. If we dropped to shell with Ctrl+Alt+F1 and typed sudo start lightdm then Kubuntu would launch display 0 with the LightDM display manager; display 0 would be spawned at Ctrl+Alt+F7.

Another way to spawn a Linux virtual display from the command line is to use Xorg. This is not recommended in the xorg man page. The way to start X with Xorg is Xorg :[Display Number]. For example:

Pay attention to the capitalization of the X. The capital X is deliberate and necessary.

How to keep desktop configurations separate

If you wish to use different configurations for each desktop environment and for each application then you need to login as a different user for each simultaneous session.

New users can be added at the command line with the adduser command.