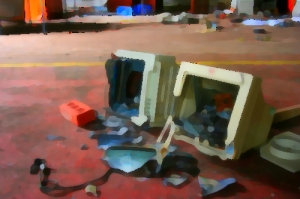 I had a shock today. In fact, I was terrified, livid and exasperated by what happened to me today: I lost a very long WordPress article that I have been working on for several months; or, at least, I thought I had lost it.

I made a few edits and added some new details to the 140 Mafia Guide, saved it and viewed it to see that the article displayed as I wanted. Only, it wasn’t there to be seen. The comments were still visible but the article was, well, gone! I felt sick. I’ve spent ages working on The Guide, adding internal links and changing the layout to make it more user friendly. I wanted to rip my computer from its socket, throw it at a wall, jump all over it, pour petrol on it and burn it. I knew it wasn’t my computer’s fault that the article had disappeared but I just wanted to vent some anger.

Fortunately, I’m not so daft as to bite my own nose off to spite my face. I kept my cool and made sure the article had saved – which it had; I checked that it was still listed in my dashboard – which it was; then I checked whether it could be seen in the category view – it could. It turned out that the direct page that displayed The Guide was the only place where it could no longer be seen. Calming down a bit, I realized that this disappearing trick must have something to do with a maximum limit on the number of characters that a post (or article) can contain after which it becomes undisplayable.

A quick Google proved me right. It’s a PHP issue that’s easily fixed by editing wp-config.php in the main WordPress folder to add

to the top of it just bellow <?php

So if ever you write a long article and find you can’t post it or it isn’t visible after you have posted, don’t jump around like a lunatic, just insert those two lines of code at the top of your wp-config.php file.

Thank you Otto42 at WordPress for posting the solution here.