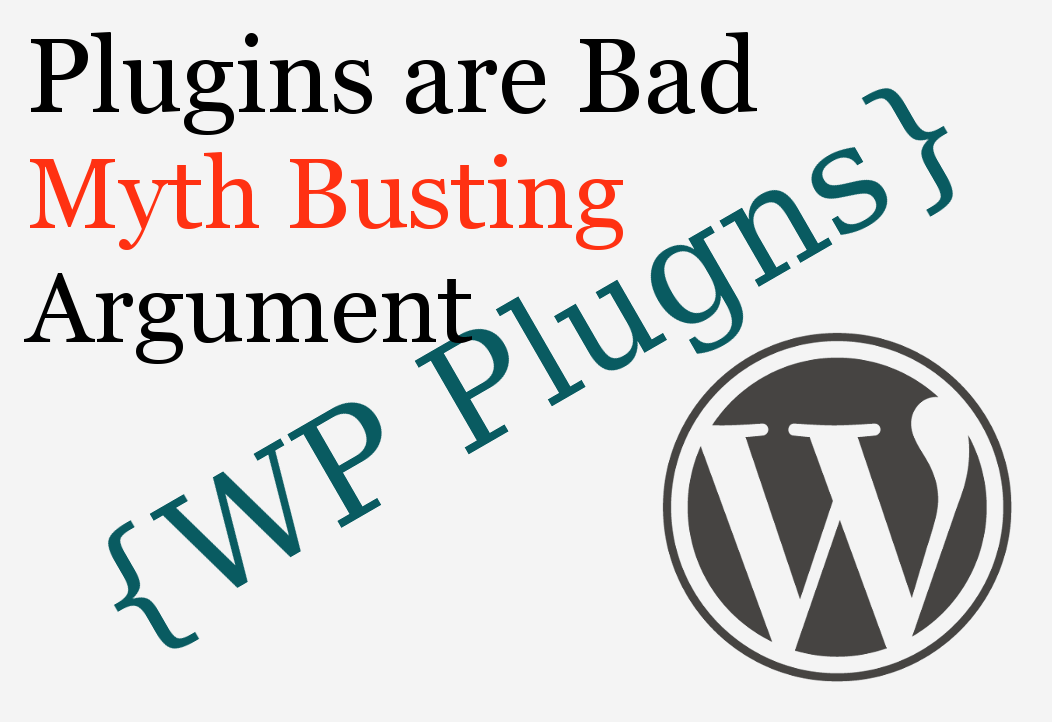 These are the same wannabe WordPress developers — non developer users are let off the hook here — who say “add code to the theme’s functions.php file but don’t use a plugin”. And they say it with the same oratory skill and emotion as an evangelist preacher telling his congregation of the upcoming apocalypse.

WordPress is designed to be easy to use and easy to customize. The WordPress core code is sprinkled with hooks and filters to allow new and seasoned developers to alter the output of WordPress code.

Plugins are bad for WordPress?

The idea that plugins inevitably make sites slow to load is fallacious and harmful to WordPress users, especially to new users of WordPress who are already trying to navigate the well intentioned myths about SEO and content organization.

What is a WordPress plugin?

Hooks and filters are useful tools. They are what make WordPress adaptable to meet the unique feature needs of different websites. They make WordPress customizable.

Hooks and filters are not limited to the WordPress core code:

Hooks and filters are power tools that exist for good reason: they simplify customization of WordPress sites.

But, but, but thousands of lines of code…

Not all plugins use thousands of lines of code. Some plugins use a single line that could easily be added to functions.php. When plugin code is short enough to go into functions.php then that is probably where it should go unless there is genuine need to load the code outside of the theme or before the theme loads.

What about plugin load order?

The normal boot order for WordPress plugin code is:

The hooks and filters that plugins ‘plug into’ load in their own specific order. The order of loading is controlled by WordPress core. The WordPress boot order is shown here.

The order in which plugins load is not necessarily important because the WordPress hooks and filters tapped into by plugins and code snippets are loaded in an order dictated by WordPress core.

But what about plugins that use a ton of code?

Some plugins do slow WordPress down but not necessarily does this make a plugin bad or unusable. Always consider whether the feature added by a plugin is beneficial or essential to the site.

Not all files used by a plugin are loaded each time a page is viewed.

Remember when people said “Don’t use Jetpack because it’s bloated”?

Jetpack contains thousands of files. The files that are used are only those files needed for the active Jetpack plugin modules to work and some of the files are for code that is only loaded when the WordPress dashboard is visited by an admin users.

Not all plugins affect the frontend of the website. Any slowdown caused by a plugin might affect logged in admin users or editors only. Test when and where slowdown occurs.

The argument that ‘plugins make sites slow’ is irrelevant to most WordPress sites where features added by plugins are necessary to enable sites to do what the sites are supposed to do.

We can write our own plugins that do the same as readily available, tried and tested plugins or we can use plugins that are regularly maintained by developers and that are trusted by the WordPress community.

Use as few or as many plugins as your site needs. Use reputable plugins. Consolidate plugin features where possible. Make use of functions.php for small simple code snippets. Write your own plugins if you prefer. But don’t be afraid to use a plugin because someone says “Plugins slow sites down”. WordPress is designed to use plugins. Sometimes a little slowdown is inevitable when a plugin adds needed complex features to a site, but would you prefer to not have the feature?

The next time someone says “Don’t use plugins because they will make your website sluggish.” Show them this article and I’ll put ’em straight for you.