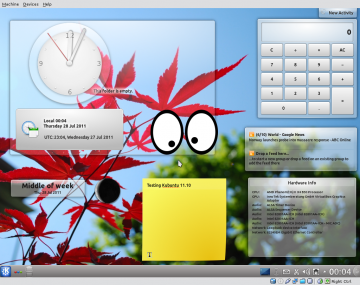 Is Ocelot ready to pounce? Or is it all oneiric?

In the twilight hours of this morning, I thought I’d take a look at the new Kubuntu 11.10, codenamed “Oneiric Ocelot”. Well, it seemed like a good idea at the time, in my half-awake non-caffeinated state.

Knowing how much you all dislike Ubuntu Unity and how many of you might be considering a change to Kubuntu, I thought you might like a non-technical peek review of Oneiric.

I downloaded the 32bit iso from Ubuntu, created a virtual machine in VirtualBox, loaded the iso and booted the machine.

Within a couple of seconds I was looking at a boot menu asking me to “Load Kubuntu”. And that’s where the fun began. KWin crashed not just once but every time I started the virtual machine to load Oneiric.

The current version of 11.10 is an Alpha release so I wasn’t surprised to hit an error so soon in the trial. The error was severe enough that it prevented a desktop environment from loading without me dropping to a shell; and that took a bit of cunning because it couldn’t be done with key presses from within the virtual machine. Usually one would drop to a shell by pressing Ctrl+Alt and a function key such as F1 or F2 but in this case it only affected my host system.

With my eyes fixed rigidly to the output printed to screen, as soon as I saw the shell prompt I flung my hands to the keyboard and typed “startx” then quickly pressed Return before Kubuntu had chance to start loading the desktop. This started the X Window manager and gave me a desktop with an installer icon on it which I quickly clicked to initiate the installation of Kubuntu 11.10.

The installation ran smoothly from that point onwards.

I let the installer partition the virtual drive automatically and set it to download non-free software and install updates as it worked. I restarted the computer once the installation had completed and this time it loaded a graphical desktop. But, hahaha, KWin crashed again. Thankfully it didn’t take the desktop with it.

The first thing I did on first boot was to install 12 updates that had downloaded but not installed during Oneiric’s installation.

With this running in a virtual machine, the next thing I did was install VirtualBox Guest Additions followed by a quick restart to activate the updates. This time KWin didn’t crash. I later discovered that that was only because OpenGL had been disabled to protect the system from further crashes. I re-enabled it via System Settings>Desktop Effects. But that’s not the end of the story and a little more is explained in First Impressions.

Oneiric uses Muon as its package manager and it isn’t currently accessible from System Settings, but it is listed in Kicker under System. Software sources are edited through Kicker>Settings>Software Sources. An alternative is to install Synaptic and use it to both install software and to add or enable repositories.

Next came the activation of several repositories via Synaptic (Settings>Repositories>Other software). Two repositories needed enabling: Canonical Partners and Independent plus their source code repos. I added the ppa:kubuntu-ppa repository along with ppa:kubuntu-ppa/experimental to ensure the very latest (probably very unstable at this point) updates. As it’s a test environment I thought what the hell, I might as well. The experimental repository contains “KDE Framework, Applications and Workspace 4.7 RC 1” packages as stated at Kubuntu.org. If you didn’t get it from that, Kubuntu 11.10 will ship with KDE 4.7.

A repository reload showed I had around 12mb of packages to install, which I did. And a sudo apt-get dist-upgrade installed a few more.

At this point, KDE Partition Manager reports the root drive to be using 3.48 GiB (3,731,275,776 Bytes) of space. Quite large for a clean install of Kubuntu but still not as big as a clean install of Windows 7 Ultimate (I think that was around 7 or 8 GiB).

It is an Alpha release and it shows.

It still uses the KDE login splash screen that is used in Kubuntu’s earlier incarnations and the desktop background listed in Desktop Settings failed to load (I’m assuming it is supposed to). Both are easily rectified. The former through System Settings>Workspace Appearance and the latter by right-clicking the desktop and selecting Desktop Settings.

11.10 boots almost as fast as 11.04. Even after installing the software updates made available through the added PPA repositories, it took around 60 seconds to boot to a working OS. First boot after Oneiric’s installation dragged for about 3 minutes and the reboot after the installation of Guest Additions, well, I thought it wasn’t going to make it to a desktop: it felt as though it took between 5 and 10 minutes. Boots since then have taken a counted time of around 60 seconds to reach a working desktop.

After re-activating OpenGL and Desktop Effects, KWin reported a whole series of effects it couldn’t enable:

I had similar issues with Ubuntu 11.04 being unable to run Unity within a VirtualBox virtual machine due to an incompatible graphics adapter. It’s probable KWin couldn’t enable the above effects for the same reason though that’s just a guess.

Oneiric comes with a Firefox installer application just like Natty does. This one installs Firefox 6. The installation works fine and I was able to play Youtube music videos without needing to install plugins such as Flash (Flash is one of the non-free software offered for install during Oneiric’s installation). Sound works great.

I haven’t noticed any spectacular applications supplied with Oneiric; they’re pretty similar to those given in 11.04. It’s more a case of what’s missing than what’s new.

Here’s an abridged list of the applications currently installed with 11.10 by default. This list is derived from the contents of /usr/share/applications. Leave a comment if you want to know whether a particular application is present or missing from the default installation of 11.10 and I will gladly take a peek.

Kicker behaves a little differently to the way it does in 11.04. I expect this is due to a KDE change more than a change in Kubuntu. In 11.04, when you navigate to an application group, such as Graphics, there is a back button at the left-hand-side of the menu. That’s gone in 11.10. In 11.10, Kicker shows navigation breadcrumbs at the top of the menu so, for example, when viewing Graphics, the top of the menu displays “All Applications>Graphics”. I prefer the way it’s done in 11.04. Though I see the merit of using breadcrumbs, I fail to understand why the back button has been removed considering it’s a nifty way to navigate Kicker. Check the picture below to see the new Kicker layout. 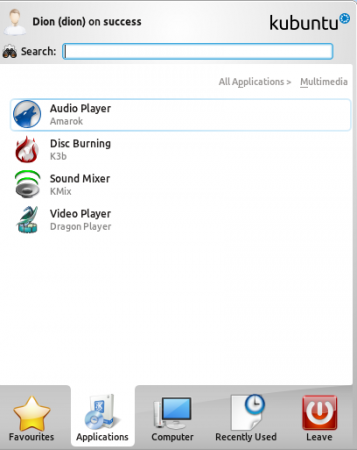 Kick of the Ocelot. It’s poised for action!

All in all, I think Oneiric Ocelot is a nice product. It seems pretty much the same as Kubuntu 11.04 and I will replace my current desktop environment with a clean install of 11.10 when its final release is ready.

Most of the Ubuntu Repositories listed here are ready for Oneiric. Those that do not currently work only fail because the Oneiric repo is yet to be created by the repo’s maintainer.

If you need to access 11.10’s boot menu, perhaps to use the recovery console, then you only need to hit the Shift key as soon as the system begins to boot.

One last point before I throw it over to you: OpenGL caused KWin crashed just before I published this post! It didn’t take my desktop with it.

So, I’m looking forward to reading your experiences and expectations from 11.10. You know where to comment :-)