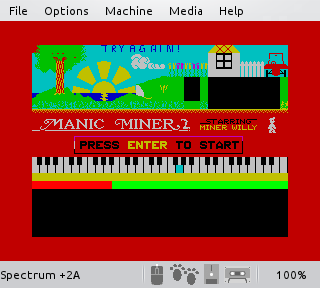 Making friendly suggestions on a forum is not always a good idea: you never know where it’s going to lead.

When I saw a request for feature ideas for upcoming versions of FUSE, the Spectrum emulator, posted on the World of Spectrum website little did I know that one simple comment asking for FUSE to be made easier to install into Ubuntu would lead me to write an installer script.

When someone on the forum wrote “hint, hint, hint: man bash. you really can contribute that bash one-liner to FUSE then. %-)” in reply to my writing “[as] much as I’d like to give FUSE more of a go because it is more up-to-date than its competitors, I’d rather settle for the easy option of using a less messy to install package.” I thought I’d better take up the challenge. I opened my text editor and began scripting an installer.

Now I know I’m not the most capable Bash scripter in the world – there are many people with much more knowledge of Bash than I have – but I’m quite satisfied with what I’ve achieved: a working installer for FUSE.

And it was with a big smile that I told my challenger that I’d met his request and “In a manner of speaking” had written a Bash one-liner.

So, here it is, at the bottom of this page you will find a download link for a Linux installer script for FUSE.

The script downloads the source code for FUSE, compiles it then installs it. It also installs the recommended dependencies such as libgcrypt, libpng, libxml2, libjsw, zlib (see note about zlib), libbzip2, libaudiofile and a few other dependencies needed to build from source as well as the non-essential Fuse Utils.

All software are installed from source code so it should be easy to adapt the script to Linux distributions that do not use apt-get. I’m open to suggestions and if you want to evolve the script then please post your work here.

Great news for users of Ubuntu 11.10 (Oneiric Ocelot). Fuse is available from the Ubuntu repositories. It is listed under fuse-emulator-common, fuse-emulator-gtk and fuse-emulator-sdl. Remember to install spectrumroms from the repo as well.

Instructions for using the script

There you have it: an easy way to install FUSE into Ubuntu and it should also work for other Debian based distros too.

FUSE is a regularly updated spectrum emulator hosted at SourceForge. It’s home website provides information about the project and links to other spectrum emulators and related projects. The home of FUSE is here.

Let me know if you have problems with the script and I will try to fix them.

The version of zlib suggested for installation on the FUSE website can prevent FUSE from installing so the default action of Fuse Installer is to install zlib from the Ubuntu (or your  distros) repositories.

On installation of FUSE, if you see either of the phrases “Z_BEST_COMPRESSION” or “Z_BEST_SPEED” in the terminal output during installation then you have an error in zlib. That error is caused by zlib.h being missing or the wrong zlib.h being called by the script. The solution is to re-install zlib provided by the Ubuntu (or your distros) repositories. Solving this error took me several hours.

If you’ve already tried to install zlib using the package suggested by the FUSE website then I suggest you download the zlib package again, unpack it, enter its directory then type or copt and paste “./configure;  sudo make; sudo make clean; sudo make uninstall” into a terminal to remove it followed by “sudo ldconfig”.

I’ve discovered a few sites filled with Spectrum goodies over the years. Here’s my top pick of them:

Bacteria (Long list of links to Spectrum related sites. Some Spanish, Most English)

ZX32 (Probably the best, though old,  Spectrum emulator I’ve ever used. Windows and Wine or PlayOnLinux)

If you know of other resources that should be added here then please leave a comment.